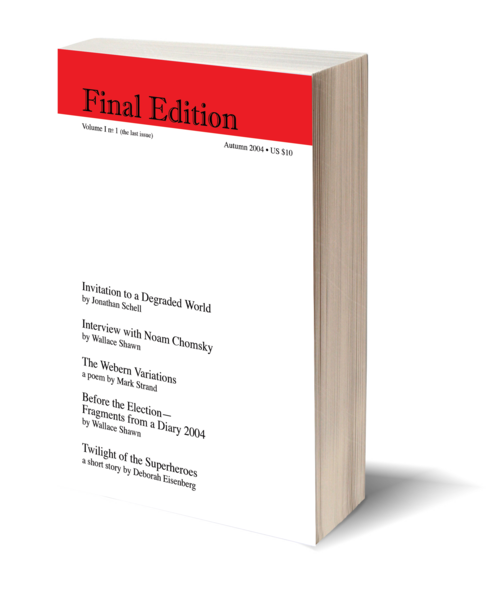 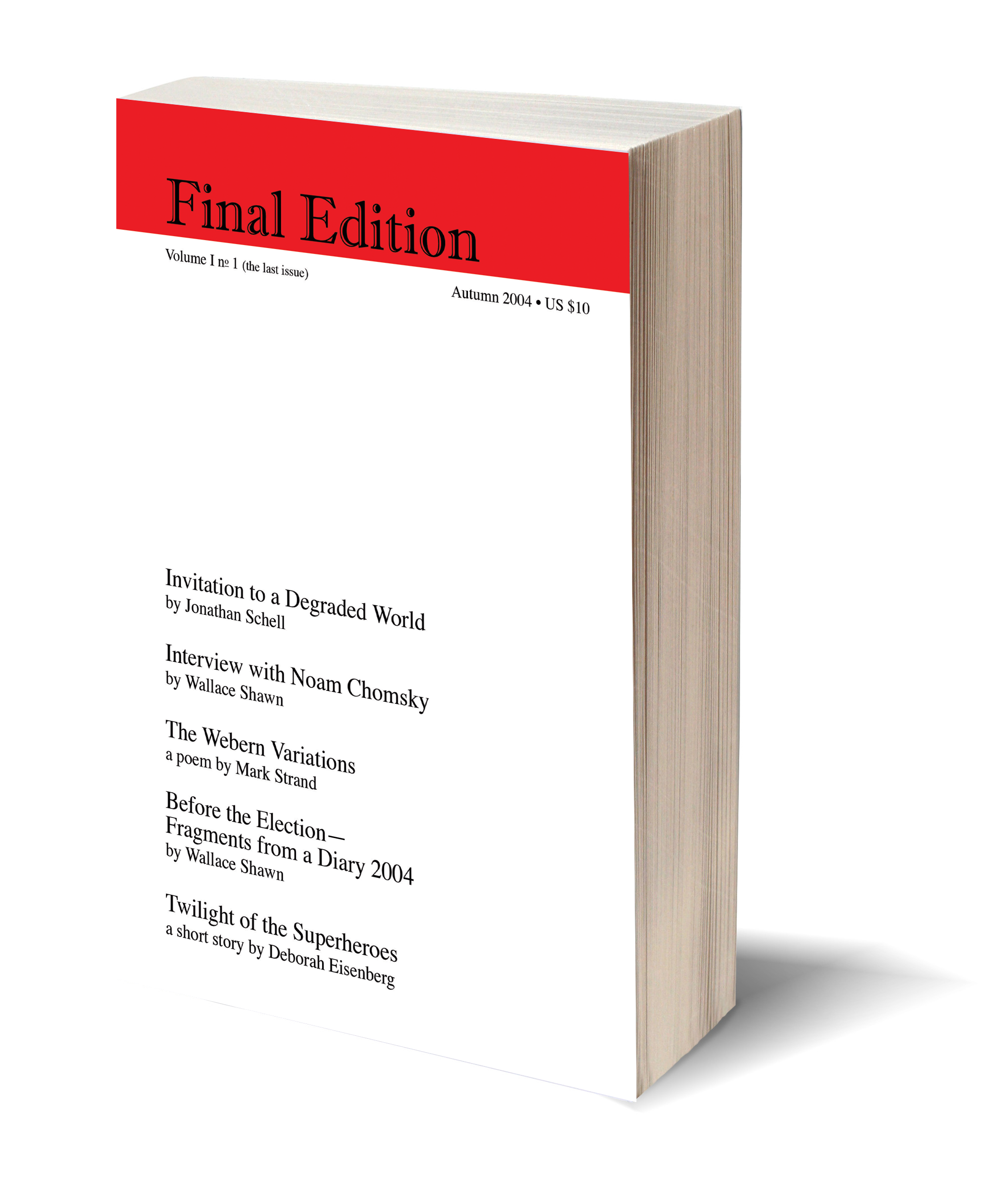 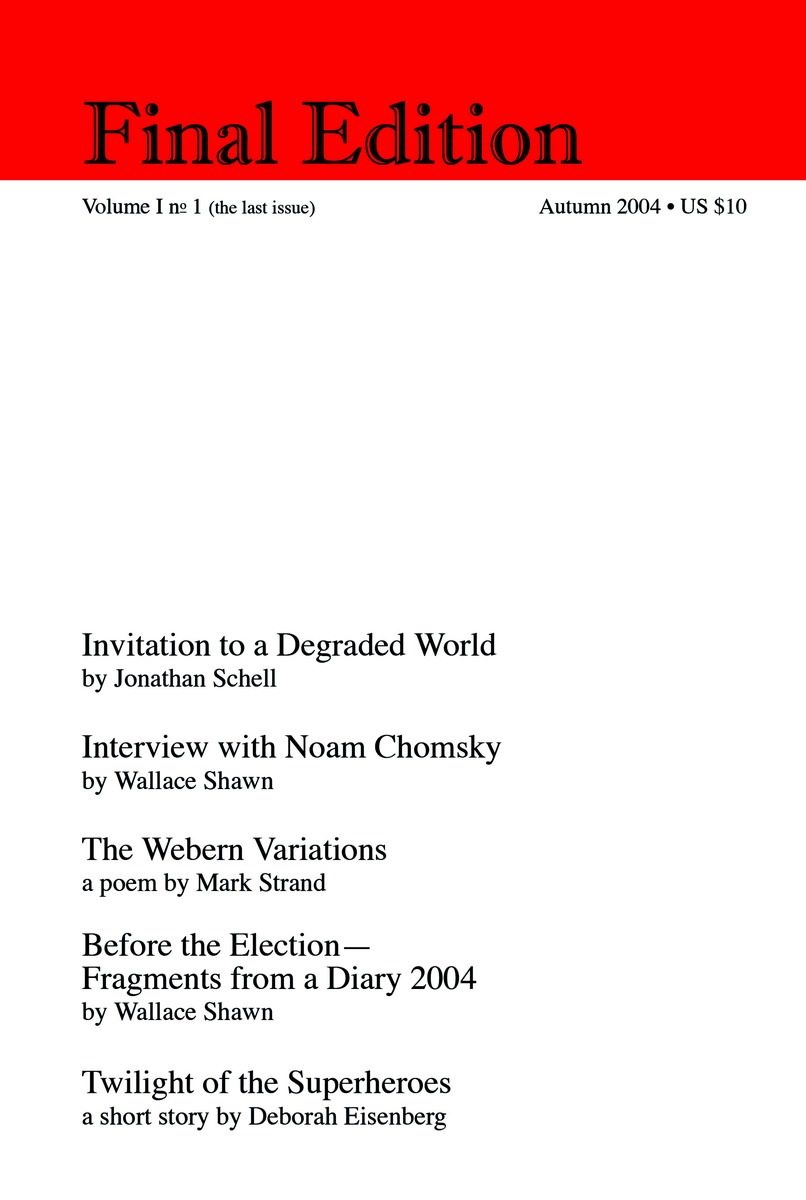 Final Edition is a one-issue-only political magazine written by people who are aesthetes and literary writers and edited by Wallace Shawn, who seriously believes that part of our national problem is that the people who run the country have a crude and minimal imaginative life and are too little acquainted with the quartets of Beethoven.

The issue consists of five pieces: "Before the Election—Fragments from a Diary 2004" by Wallace Shawn. The diarist broods on the analogy between the addiction to pornography and nationalistic obsessions, and he wonders whether a collection of people who vote in a kind of sleepwalking ignorance can ever be called a democracy.

In "Invitation to a Degraded World" Jonathan Schell meditates on the comic book/disaster movie view of life, in which bin Laden and George Bush are both immersed, and discusses the "standing army stationed in all of our homes," the media. "The Webern Variations," Mark Strand’s hauntingly delicious poem, explores what is most poignantly beautiful, while exploring the themes of darkness, descent, decline, and nothingness.

Wallace Shawn Interviews Noam Chomsky. For those with no acquaintance with Chomsky, this could make a wonderful introduction, while offering surprising insights to those who know him well. Chomsky is electric with vitality, wit, and rage as he ranges ferociously across the present and ancient worlds, giving his thoughts on the development of the internet, the 2004 election, and the God of the Bible. In an odd way, the interview highlights the inspirational and optimistic quality of this enormously angry man.

Finally, in Deborah Eisenberg’s brooding, passionate, and brilliant "The Twilight of the Superheroes," Deborah Eisenberg paints a brutally honest portrait of New York City today and of our lives today, wherever we live. Through observing the lives of some sophisticated residents of the great metropolis, we encounter truths which are both poetic and deeply political.

Final Edition comprises all new pieces, never before published in any format. 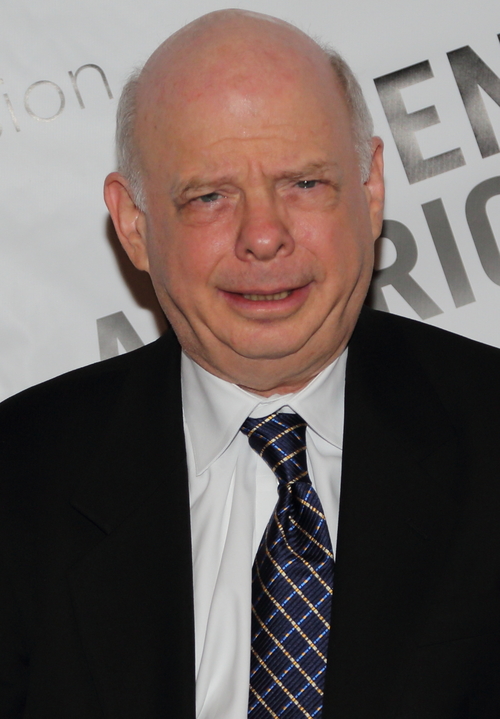 Actor and writer Wallace Shawn has had several of his plays, including Marie and Bruce, Aunt Dan and Lemon, and The Designated Mourner, produced off-Broadway. Another play, The Fever, was adapted into a film starring Vanessa Redgrave. Shawn has appeared in over 60 films and many television shows. His most recent book of nonfiction is Essays, published in 2009. Shawn lives in New York City.