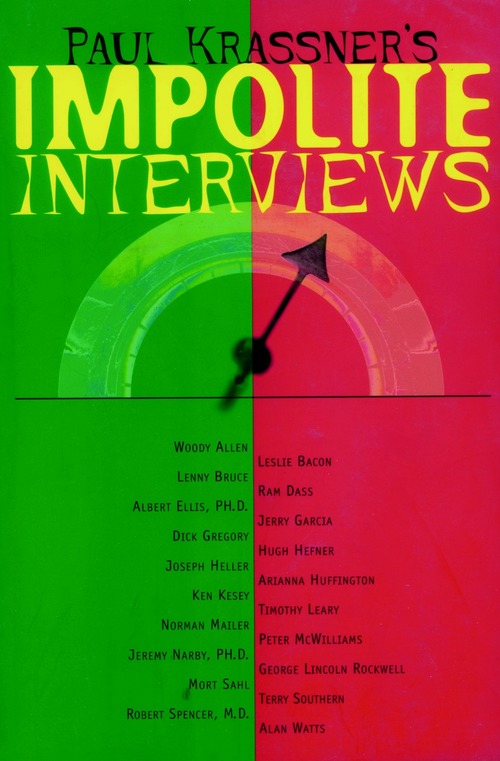 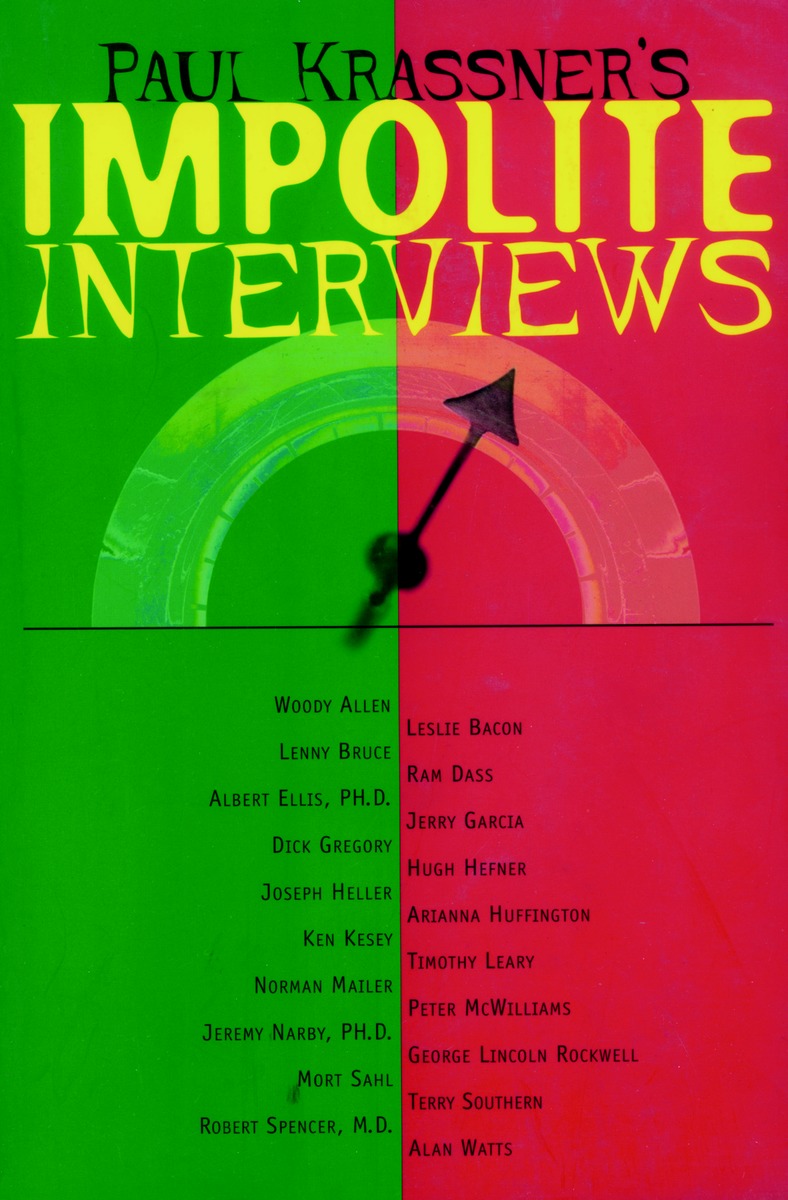 Paul Krassner endures today as an intrepid, unrehabilitated, counter-culture torch-bearer, calling attention to the absurdity in reality, poking irreverent fun at the things we hold sacred. In 1958, having decided that what the world needed was a satirical magazine for adults, Krassner began publishing The Realist, and has continued to do so, on and off, ever since. People magazine calls him the "father of the underground press." Library Journal calls The Realist "the best satirical magazine in America."

Krassner's Impolite Interviews delivers twenty-one of the most compelling encounters you will ever witness, from a 1959 interview with author Alan Watts to Timothy Leary in 1995 just weeks before he died, from Norman Mailer talking about sex to Jerry Garcia recounting what it was like to play the Pyramids, each interview gives a unique take on major issues: Communism, segregation, the Cold War, the sexual revolution, and the drug culture, by major personalities. Impolite Interviews presents perspectives as diverse as George Lincoln Rockwell (then head of the American Nazi Party) and spiritual master Ram Dass. Krassner offers readers an illuminating look at some of the most important figures of the second half of this century through the eyes of one of this era's most innovative journalists.

All of the interviews in Impolite Interviews were originally published in The Realist, and thirteen of the twenty-one are presented here for the first time in book form.

“[Krassner is] an expert at ferreting out hypocrisy and absurdism from the more solemn crannies of American culture.”

[Note: You can make a donation in Paul Krassner's memory here.]

Back in 1996, Kurt Vonnegut wrote the foreword to a book by Paul Krassner with the beautiful title The Winner of the Slow Bicycle Race. Paul’s own introduction to his book also had a memorable title. It was called “The President’s Penis.” At the launch for it at the National Arts Club that autumn, Kurt rose to his full height at the podium, leaning into it, and said with emotion to the large audience, “Paul Krassner is a national treasure. Indeed, he is one of our most important national treasures.”

There were titters in the audience. Vonnegut glared at them. They had assumed he was being comical in his remarks, since after all Paul Krassner was as irreverent a satirist as has ever carried a US passport. But he wasn’t kidding. And now he raged at the audience, assuring them he was as serious as he had ever been, and that if anyone didn’t agree they were free to leave. No one left. There was a long pause in which Vonnegut cooled off, and people recovered from the shock of seeing him genuinely angry and intimidating in defense of his friend.

Then he continued with his remarks, mostly talking about how enamored he was of a poster Paul had created and put on sale, at the start of the ’60s, consisting of the words “Fuck Communism” against a background of red, white, and blue. Kurt considered this to be, he said, “a miracle of compressed intelligence nearly as admirable for potent simplicity…as Einstein’s e=mc2.” And at the end of his remarks, he invited Paul to the podium to continue the presentation.

Paul was co-founder with Abbie Hoffman of the Yippies and one of Abbie’s longest standing friends and collaborators. Paul founded and still edited, half a century and more later, the Realist, and authored many books, including three from Seven Stories, The Winner of the Slow Bicycle Race, One Hand Jerking, and Impolite Interviews. He co-wrote Lenny Bruce’s autobiography, How to Talk Dirty and Influence People, and probably considered Lenny his bff. Paul wasn’t simply funny, he was kind of the original funny bone of America.

In the last couple of weeks Paul was writing a foreword for me to a biography of Abbie Hoffman by Abbie’s brother Jack and me that Seven Stories is reissuing in the fall. He needed my help to get it done, but he was still funny and warm and smart in all our emails back and forth. I had no idea this was so close to the end. Without knowing anything about it, I felt enormously grateful to him for his gesture of support and the absolute graciousness with which he made it. I’m guessing it was the last piece he wrote. His last words to me, written eleven days ago, conveying his agreement about a sentence in the foreword I suggested he keep ambiguous, were “Mushy lives.”

Paul knew a lot of the same people we did, and was an enormous influence on many of them. And maybe “influence” is too obvious-sounding a word. He was a counter-comfort, comforting because you knew you could go as far as you possibly could to test the limits, no holds barred, and still be comfortably inside the larger net he cast without even thinking too hard about it.

Remembering Lenny Bruce While Thinking About Trump
More on the blog 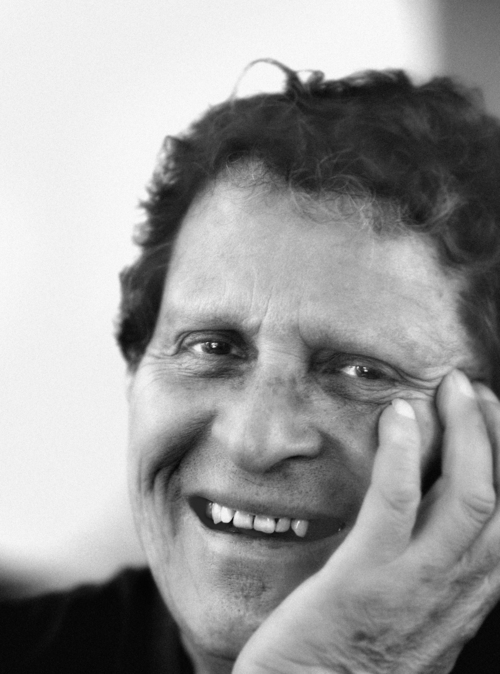 PAUL KRASSNER cut his teeth as a journalist at Mad magazine, worked with Lenny Bruce, and founded the Yippies with Abbie Hoffman and Jerry Rubin. In 1958 he founded the satirical magazine the Realist and has published it discontinuously ever since. His autobiography, Confessions of a Raving, Unconfined Nut: Misadventures in the Counter-Culture, was published by Simon & Schuster in 1994. The Winner of the Slow Bicycle Race, a collection of his best satire, followed in 1996. His other works include One Hand Jerking: Reports from an Investigative Satirist, and Impolite Interviews. Krassner lives in Venice, California with his wife Nancy.

Other books by Paul Krassner 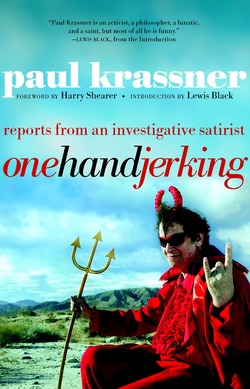 One Hand Jerking: Reports From an Investigative Satirist

by Paul Krassner and Kurt Vonnegut

The Winner of the Slow Bicycle Race