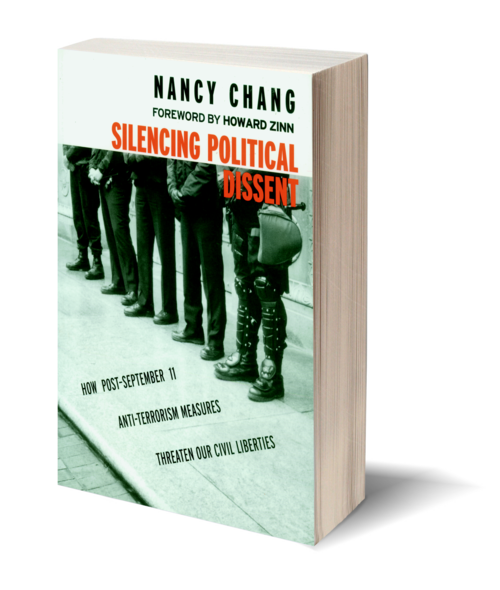 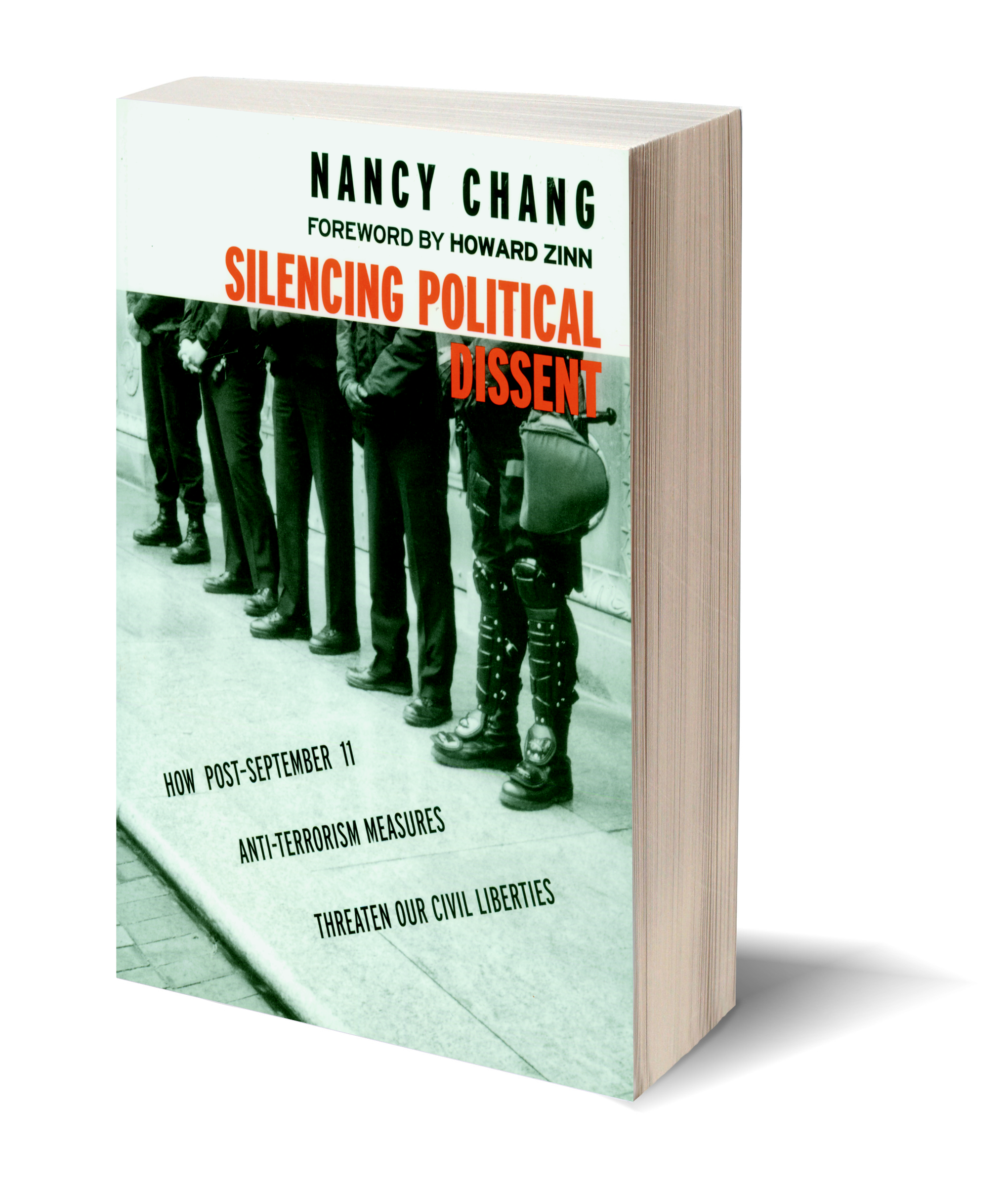 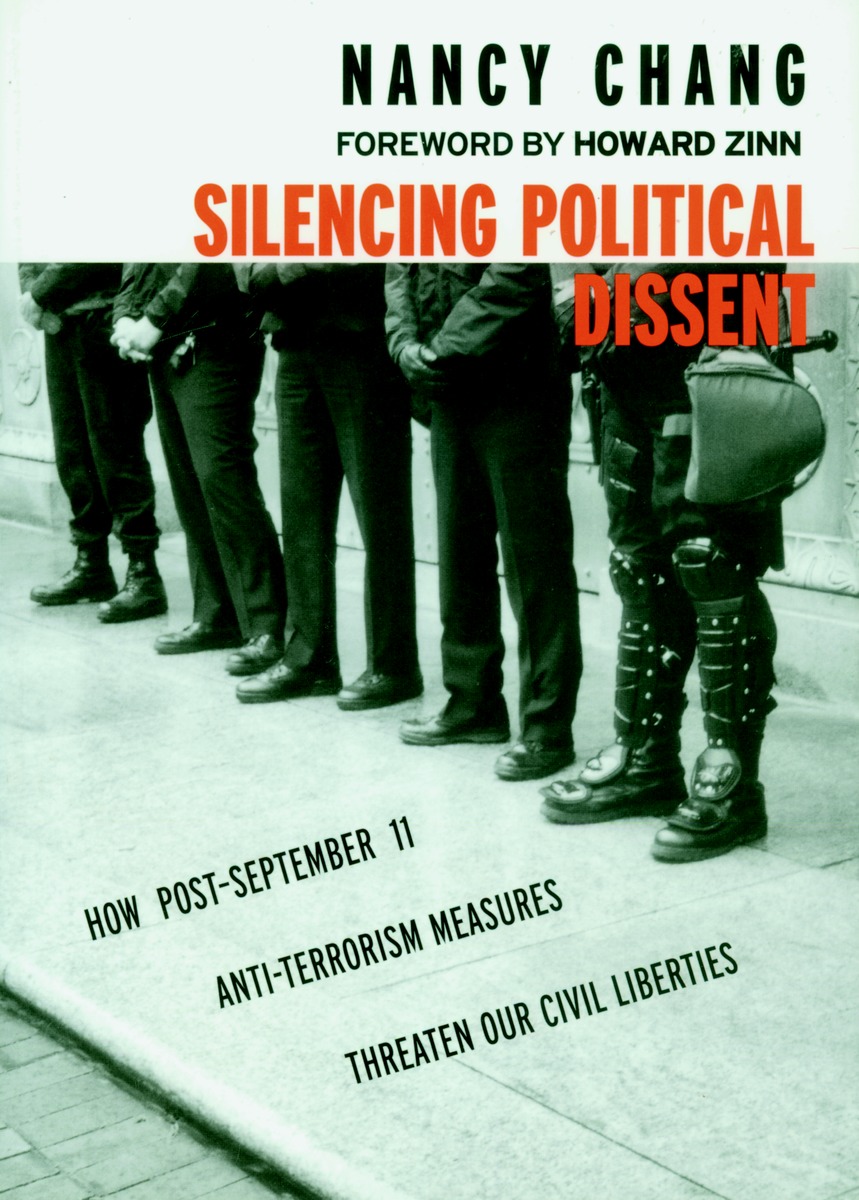 Chang's compelling analysis begins with a historical review of political repression and intolerance of dissent in America. From the Sedition Act of 1798, through the Smith Act of the 1940s and the internment of Japanese Americans in World War II, to the FBI's infamous COINTELPRO program of the 1960s, Chang recalls how during times of crisis and war, the U.S. government has unjustly detained individuals, invaded personal privacy, and hampered the free speech of Americans.

In compelling and lucid language, Chang describes how "just six weeks after [September 11], a jittery Congress—exiled from its anthrax-contaminated offices and confronted with warnings that more terrorist assaults were soon to come—capitulated to the Bush Administration's demands for a new arsenal of anti-terrorism weapons." Over strenuous objections from civil liberties groups on both ends of the political spectrum, Chang describes how Congress overwhelmingly approved the "Uniting and Strengthening America by Providing Appropriate Tools Required to Intercept and Obstruct Terrorism Act," better known by its acronym, The USA PATRIOT Act. The House vote was 356-to-66, and the Senate vote was 98-to-1. This hastily-drafted, complex, and far-reaching legislation spans 342 pages. "Yet," writes Chang, "it was passed with virtually no public hearing or debate, and it was accompanied by neither a conference nor a committee report."

Chang also describes how, since September 11, the Bush administration vastly increased its own executive powers. She writes, "When the Bush administration has lacked authorization from Congress for its domestic anti-terrorism measures, it has authorized them by executive fiat. On the basis of interim agency and directives, and under cover of secrecy, the administration has interrogated without suspicion, arrested without charge, and detained without justification as many as two thousand Muslim nationals of Middle Eastern and South Asian countries. Yet to date, the only indictment for a crime directly relating to the September 11 attacks has been that of Zacarias Moussaoui, who was arrested prior to the attacks. Through these measures, the administration has all but officially sanctioned the practice of ethnic and religious profiling."

Chang's expertise as a senior constitutional attorney shines through in the power and clarity of her argument. Meticulously researched and footnoted, Chang's book forces us to challenge the government when it is unpopular to do so, and to consider that perhaps "our future safety lies in the expansion, rather the contraction, of the democratic values set forth in the Constitution."

“Take a little of your time to read Nancy Chang's Silencing Political Dissent. If this incisive explanation of the government's current assault on America's constitutional freedoms and due process doesn't motivate you toward the defense of democracy, it is likely that you either don't use your rights or care enough about their protection for others.”

“An invaluable primer … Everyone living in America should read Chang's concise and clarifying book, and use it as the foundation for a new habit of vigilance. Freedom is not a natural, consistent, or inevitable state of being; it's a construct, a cooperative effort, an ongoing work of art that we must all contribute to and safeguard, lest it be dismantled and erased.”

“In a crude exploitation of the anguish and concern over the terrorist atrocities of Sept. 11, the Bush administration has sought to implement favored programs that have no relation to terrorism and would be sure to arouse protest if it could not cynically wield the weapon of "patriotism" to silence opposition. That includes steps to strengthen unaccountable executive power and curb independent thought and expression. Chang's study expertly reviews these threats, which should be understood and resisted by those who value their freedom and democratic rights.”

“Silencing Political Dissent is the stuff of sleepless nights. Read it, and be warned.”

“Nancy Chang's Silencing Political Dissent is more than a brilliant, lucid legal analysis. It is a deeply felt, passionately argued, articulate polemic of the defense of human rights in this country. Anyone who cares about America should read this book.”

“Silencing Political Dissent offers a compelling primer in the ways that responding to fear can endanger—and has already endangered—the freedoms and liberties that define us as a nation. Nancy Chang explains in clear, concise, and jargon-free language why the government's response to September 11 poses the greatest threat to civil liberties that most of us have experienced in our lifetime, and illustrates with historical examples why so much of what we have done is a mistake. A must-read for anyone concerned about just what kind of freedom will actually survive Operation Enduring Freedom.”

“Nancy Chang was among the first to analyze the Ashcroft/Bush assault on human rights. This is an indispensable book for anyone who wants to understand the current crisis.”

“This is an essential book for anyone who wants to make the Bill of Rights entirely relevant in the age of Bush-Ashcroft.”

“This analysis by Nancy Chang should be read by everyone concerned with a free society.”

– Howard Zinn, from the foreword

It's come to our attention that Arkansas State Representative Kim Hendren has recently proposed a bill to ban all books by or about Howard Zinn from use in public schools and open-enrollment charter schools throughout the state.

We'll track how it fares over the next few months. For now, we can just hope it does what such silly attempts at censorship tend to do these days: drive up sales! Check out some great Zinn titles from SSP below. And if you're from Arkansas, drop us a line at sevenstories@sevenstories.com to see if we can't arrange a special Zinn deal for you.

HOWARD ZINN’s (1922–2010) great subject isn’t war, but peace. After his experience as a bombardier in World War II, he became convinced that there could be no such thing as a “just war,” as the vast majority of modern warfare’s victims are made up of innocent civilians. In his books, including A People’s History of the United States and its companion volume, Voices of a People’s History of the United States, Zinn affirms the power of the masses to influence major events. Through a lifetime of pointed scholarship and principled civil disobedience, he has led and continues to lead generations in the ways of peace. Check out A Road Map to Howard Zinn's Writings Published by Seven Stories Press here.

Other books by Howard Zinn

Targeted: Homeland Security and the Business of Immigration