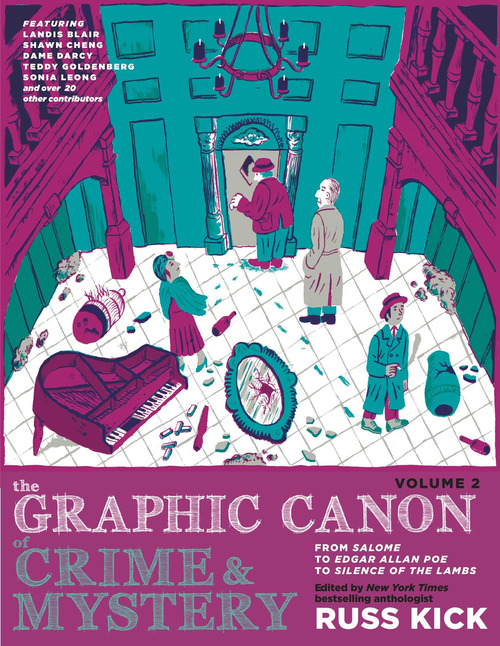 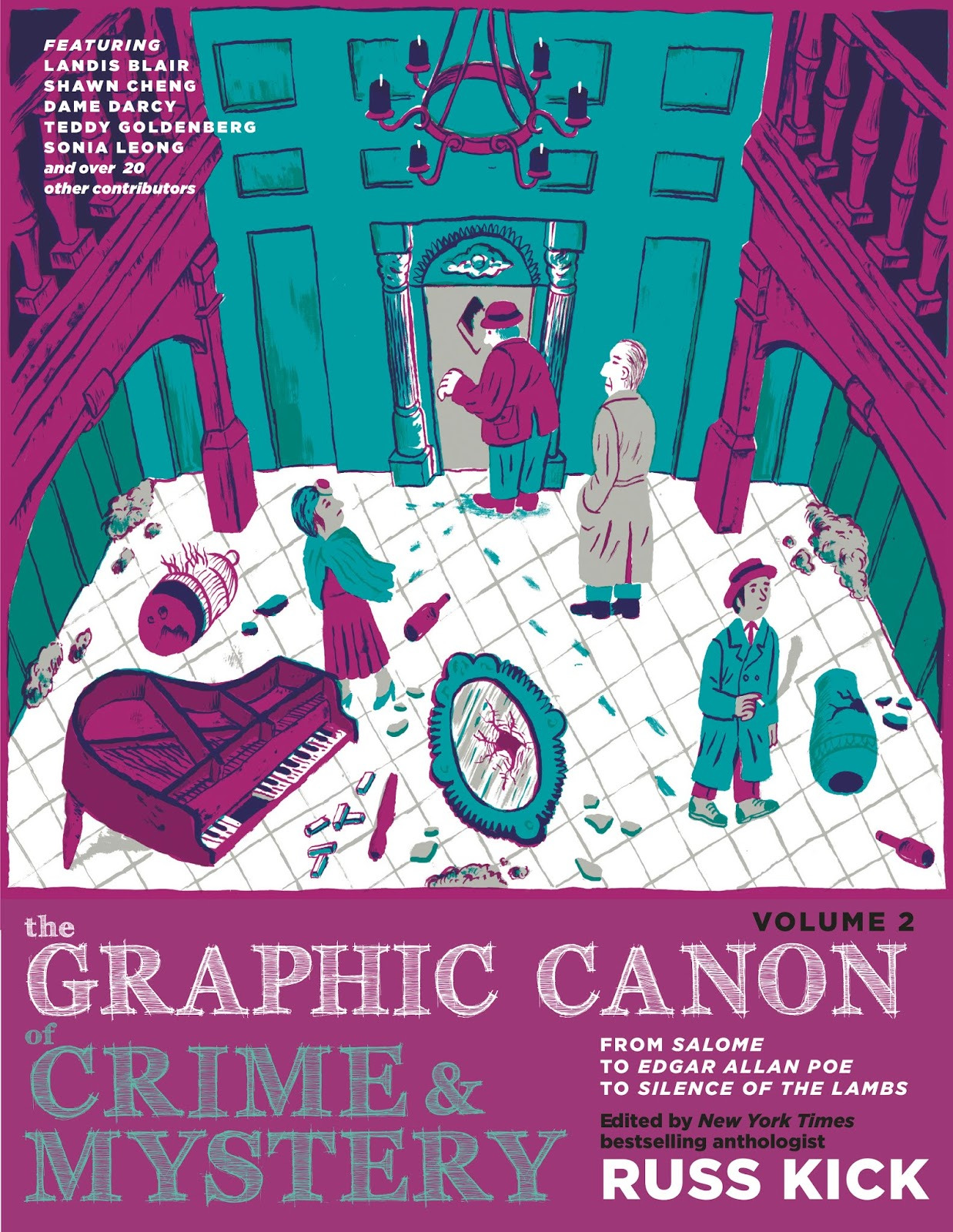 The latest addition to the acclaimed Graphic Canon series, edited by Russ Kick.

As with previous volumes in the Graphic Canon series, the illustrations run the full gamut of media and techniques, and artistic interpretations range from verbatim literalism to metaphorical extensions to surrealism and abstraction. The common theme, tracing the origins and standout texts of the morbid and mysterious, unites these multifarious partners in crime.

“Featuring adaptations of famous crime classics, most of which were created specifically for this volume, this work displays a range of absolutely stunning talent. From a relatively straight­forward depiction of the murder scene in Fyodor Dostoyevsky’s Crime and Punishment to a wildly experimental take on Stanley ­Kubrick’s A Clockwork Orange, [Russ Kick] presents a fantastic survey of the literature concerned with criminal activity, as well as a primer on everything possible in the graphic format ... As an introduction to the crime genre, this edition is second to none.”

“From Poe to Kafka to Dostoyevsky, all the masters are here, in these short, graphic renderings of the darkest, most foreboding writing of all time. With different artists and illustrators taking on each tale, there are many revelations.”

“[Russ Kick] has managed to create something unprecedented in comic art ... It is, for now, the most sustained anthology of comic art in the English language – the best showplace of what comic art is today and what it can do. That’s quite an accomplishment.”

“Almost anything can be seen as a crime story, and almost anything can be adapted into a graphic novel. Few, however, have attempted such an ambitious and quirky melding of these two truths as editor and artist Russ Kick with his new anthology, The Graphic Canon of Crime and Mystery. This cleverly arranged series of graphic adaptations of classic mystery tales brings together a wide range of artists matched with a diverse list of stories, many of which are only loosely categorizable as crime fiction (that’s part of the fun of it). With everything from biblical judgements to decadent poetry to 19th century classics, Kick and his army of artists have crafted a formidable and fascinating collection.”

“This is a take on the crime & mystery genre that proves quite refreshing and a true eye-opener. Russ Kick, in the role of curator/editor, has taken an offbeat path in order to emphasize just how diverse and unpredictable his subject can be ... Kick manages to keep just the right unsettling vibe running throughout this impressive anthology.”

While writing articles and a column for The Village Voice, Kick was the founder and editor, independently, of The Memory Hole, Memory Hole 2 and Altgov2 which made US government documents available to the public through FOIA requests and other means. In 2003 he exposed an unredacted internal report on Justice Department hiring practices. In early 2004 he brought to light government-censored photographs of the coffins of the military war dead from the Iraq War. In both cases, his reports on his own site became the subject of front-page reporting in the nation’s leading national newspapers.

Kick produced two explosive series of books that were published by the Disinformation Company throughout the first decade of the 21st century. The 50 Things You’re Not Supposed to Know and You Are Being Lied To series of books became underground bestsellers, with titles like Everything You Know Is Wrong, Everything You Know About Sex Is Wrong, etc., educating the Generation X kids who became adults in that decade about government lies and the history that wasn’t taught in schools.

At the end of that decade, Kick did an about-face, and began a new career as an anthologist bringing together comics art with our civilization’s legacy of classic literature, inviting hundreds of illustrators and artists to reimagine classic stories, poems and plays in new ways in a series of books known collectively as The Graphic Canon. The Graphic Canons were celebrated as a new kind of illustrated book, with Volume 3 hitting the New York Times Bestseller List for Graphic Books, and rights sold for foreign editions to publishers around the world.

Towards the end of the 2nd decade of the 21st century, Kick returned with renewed intensity to his political activism. From 2018 to 2021, he served as one of the directors of Rise for Animals, where he expanded their Animal Research Laboratory Overview with documents concerning animal experimentation obtained through FOIA and public records requests.

From Molly Crabapple, comics artist and colleague of Russ Kick —

I first found Russ Kick when I was thirteen, through his book Outposts.  For a friendless goth kid like me, Kick was the exact sort of guide I needed. Like a punk-rock Virgil, Russ's work led countless young people like me to the exact sort of places that America tried to hide—to the dangerous, thrilling, strange, ludicrous and beautiful realms where we imagined we could belong. I was an immediate devotee; his formative bad influence helped shape my own artistic path. With his Disinformation series, Russ challenged power. He peeled the censored bars off of redacted documents, and kicked down the doors of the pompous and mendacious, to reveal their skulduggery to the world. His work was transgressive, subversive, and irreverent of piety—all qualities in short supply today. Russ Kick showed the possibilities of life. Many years later, I was lucky enough to have Russ as an editor on The Graphic Canon. Never meet your idols, they say, particularly the ones of the gonzo variety, but in Russ's case, this would have been bad advice. He was unfailingly kind, supportive, generous and perceptive. I cannot fathom the loss of such a man, but the world is made more narrow by his absence.